For years, I've wanted to make  one of the kitchen walls into a big chalkboard. I actually bought a half gallon of chalkboard paint just before Hubby's accident. It was in the back of the Suburban and I don't know if it got left behind when we went to the impound lot and tried to separate our belongings from the broken bits of car.

After that, I didn't have the time or energy to go paint shopping again. Last week, I saw an etsy listing for a roll of chalkboard vinyl. I may not have the energy or enthusiasm for paint, but that I could do! 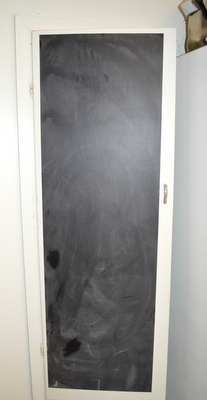 They sell the stuff at Hobby Lobby and, with a coupon, it was less than five bucks. As an extra bonus, the roll was just the right size to fit the door of our little built in spice cabinet. I'm glad I didn't read the product reviews first because they're awful.

My vinyl sticks just fine. There were a few little air bubbles, but I decided not to fuss with them until I'd actually decided whether or not I was going to keep using it. They've all gradually smoothed out with the eraser, except for a couple of bumps that are in the door itself. I re-rolled it so that the adhesive was on the outside and then peeled off the backing paper as I rolled it onto the door - kind of like applying wallpaper. It's a bit crooked, but I'm not going to fuss with that until I decide if this is a permanent addition to my kitchen. 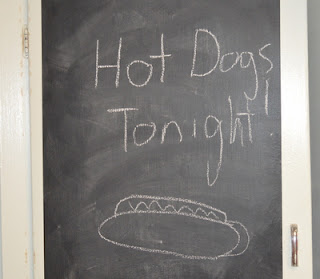 My dream is to learn to do the fancy chalkboard lettering....how to do it, not print fonts and trace a projected image. For now, I'm writing notes to my husband and kids. The biggest surprise -- the boys really don't mess with it much. While I was putting this project off, they must've grown up a bit.
Posted by Michelle at 4:00 AM

A cute idea and so functional for a busy family. We use a dry erase board up in the laundry room for notes to self and each other. That works too.