Playmobil and Lego are the coolest toys ever. BUT...they're expensive and they come with soooo many pieces and my boys don't care about keeping track of things and I'm tired of being the only one who feels sad when things get lost.

Then I found Perler beads... 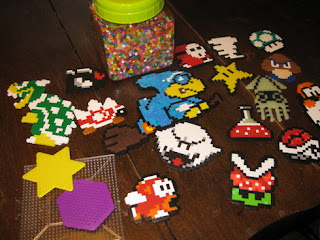 Perler beads are my new favorite toy. They're itty bitty plastic beads that you arrange on a plastic pegboard and then fuse together with your iron. Think Lite Brite, but the kids get to keep the pictures they make. And they're less expensive, and the pieces won't make angry noises when you try to suck them up with the vacuum cleaner....

I'm telling you, these are the BEST toy I've ever bought my sons!

It all got started with the Super Mario Brothers Quilt Along. We all know that I'm eventually going to cave and make my boys that quilt, right? But for the mean time, I thought I could pull out the Perler bead set we'd bought a few years ago and they could use the pattern to make their own Mario guys. (In case I haven't mentioned it, everything in our house must be Mario...or Luigi....or some other Nintendo game element.)

I wasn't expecting to have all four of my children laying on the floor around the pegboards, happily creating. Teenage Daughter has since gone back to her polymer clay and knitting and nail art, but the boys have been engrossed with their creations for a month now.

We started with one of the inexpensive kits from Walmart, and since then we've added the clear boards, and a bucket of 11,000 beads, and packets of individual colors. The Perler online store has prices even better than Joann's coupon prices. Get on their mailing list and they'll send you lots of special offers. They've also got projects on their website -- I'm hoping someone will make the Red Raider three dimensional airplane or the pirate ship.

Search etsy or Pinterest for "Perler beads" or "hama beads" and you'll find projects that simple enough for the kids and some that are absolutely amazing. I've started a Perler bead board with the projects that caught my eye.

They're tiny. I don't even need to remind you that they're a choking hazard, right?

They're easy to bump off of the peg boards. We've had some spectacular losses moving them from the table where they work on projects to the ironing board. And a couple of incidents of deliberate sabotage.

My boys never looked twice at my iron until they realized that it was useful for their projects. These days, I'm putting it up instead of just unplugging it.

This post is linked to Works for Me Wednesday at We are THAT Family. It isn't a sponsored post...there aren't any affiliate links...I just really wanted to gush about our favorite new toy. And maybe help my readers out with a last minute gift idea for the little boys on their list.

And the most amazing thing? My boys are careful not to lose their beads.
Posted by Michelle at 7:50 PM

My DIL got some and her kids have had a ball. They really are fun but keep them away from the 1 year old!

I loved these beads as a kid! So happy to know they still exist. Enjoy making all sorts of creative creatures with your sons!

oh my goodness - these are amazing!!
makes me want to sit down and make a bunch of mario characters for my brothers!!
maybe for their birthdays... thanks for the inspiration!