Break out the stitch markers!

I don't know what happened to my Springtime Bandit. Somewhere around row 27, things went terribly wrong.  There are currently 2730 projects listed on Ravelry, which has me convinced that the problem is with my knitting and not the pattern.

I tried that row five times and just couldn't get it to work. And after ripping out and starting over once, there was NO way I was going to start over a third time. I wasn't that in love with this thing.

It sat for a couple of weeks while I decided what to do with it. I thought about binding off at the point where things went wrong...or unravelling the whole thing and making something else entirely...or trying to force my way through those last eight rows the best I could. 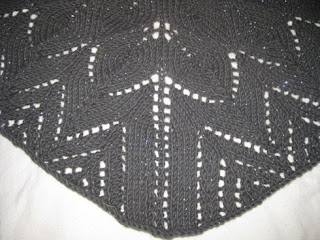 There are diagonal rows of yarn overs and purl stitches that fall at the same spot in every row. I could see where those were supposed to fall, so I placed a stitch marker at every single pattern repeat and did some desperate decreases (including a ridiculous number of knit four togethers) to get back to the right number of stitches.

It actually looks better than I thought it would. An experienced knitter could probably find my problems, but it's not an obvious disaster.

Best of all, it's off my needles and I can start looking for another shawl to cast on. And get back to those lateral braids. After this mess, they've started to sound relaxing!
Posted by Michelle at 4:00 AM

I finally found a knitting project I think I can successfully complete -- one of those sashay scarves. LOL! Your project looks SO pretty! :)