Now that I've pulled out the pattern and pieces and taken a good look at it, I'm feeling better about North Pacific. It would be possible to finish it in a month. Not likely, but possible.

Things have changed since I packed it away.

I've got the Go! to use for the rest of those 1500 half square triangles. Not having to measure them perfectly or cut them...and then not having to press the squares open and trim the dog ears...that could be the difference between this quilt happening or not happening. I don't mind sewing the triangles, but if I can make the cutting easier, I'm all for it.

Those bonus half square triangles I was saving from Monkey Business can be trimmed down to the size I need for the itty bitty sail pieces. So I don't have to cut those, either!

The long side pieces of boat background are supposed to be 2 1/2 x 4 1/2, but I decided to piece them with 2 1/2" squares I already had cut. I like the way it looks, but the background for the whales is an odd size I can't figure out how to piece.... so I may be redoing my boats after I finish some whales and see how it looks together. 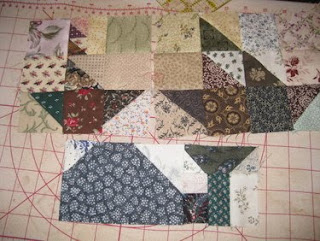 Bill took the kids and I to the movies today. A local theater has fifty cent admission on Mondays, so it works out to about $20 for all six of us to see a movie and gorge on popcorn -- and most of that cost is the popcorn! Over the past couple of years, if it's Monday and we feel like going out, we see if there's something playing that the little guys will sit through.

Between the content advisories on the Internet Movie Database, and the Common Sense Ratings on Netflix, I can usually figure out if movies are going to be appropriate for the kids or not. I don't always agree with their logic, but it's better than guessing blindly based on a couple of commercials and the actual rating. Do those make any sense to anyone anymore?

I really wish I could find something like that for books. My teenage daughter brought one home from the young adult section of the library this week that absolutely horrifies me. She was in a hurry and picked it based on the intriguing title and cover. I looked through her books, read the description, was concerned, then started to read the book. I'm on page 68 and have lost track of how many times the main character has been sexually assaulted -- and that's not the worst of it.

This is a young adult book, not an adult title that wound up in the wrong section. The publisher's site says it's for readers age sixteen and up. That's great, but are the sixteen-year-olds still getting books from the young adult section? I'd rather my teenager didn't read it, but the world wouldn't end if she did. But my ten year old is starting to read YA books, and if I literally read 24/7 I wouldn't be able to pre-read everything the kids want to know if they can read.

I don't think for a second that they should rate books, but I would love a cheat sheet somewhere!
Posted by Michelle at 5:41 PM