Yesterday, I left the kids at home with their daddy and went to church to play with the quilt group. There were gorgeous scrappy quilts and grownups who are just as excited about fabric as I am. And there was cheesecake. Sadly, they only meet once a month, and won't get together again until the end of January.

I'm just itching to get out my scrap bins and rotary cutter and start slicing up fabric to make a quilt like the one Barb did, but I was barely awake enough to get Bill's lunch together this morning and should probably avoid sharp objects until I get some more caffeine into me. The kids weren't up yet, so I pulled out Garter Stitch Stripes, decided I really can't live with the color combination I'd started with, and cast on a new version. 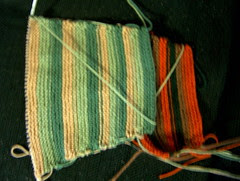 These colors are so much better! I had my heart absolutely set on the pumpkin orange until I started knitting and realized how garish it was going to look. It didn't look any better after sitting in my knitting basket for two weeks, so I slid it off the needles and cast on with some calmer colors. I still want the pumpkin, though. Maybe there are some other colors that would make it less frightening. 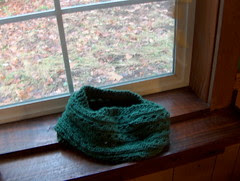 The Quickie Cowl is all sewn up and ready to go out in the cold, but this one isn't for me. Neither is the pink one, which Alex took off with before I could get a picture. I'll get my own, as soon as I can come up with a skein of Softee Chunky in a color I like. Which might be another week, because I don't think Walmart has it in brown and Michaels had to move their store out into the middle of nowhere.

The stitch pattern is so easy and this works up so quickly that I could see myself whipping out a dozen of them. I probably won't, but it's easy to imagine.
Posted by Michelle at 8:52 AM