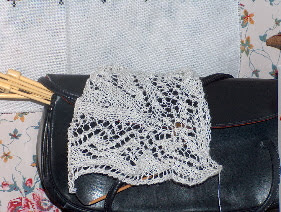 Jealous of everyone else's pretty pictures, I finally cast on for my Mystery Stole with the same yarn and needles I was using for Mystery Stole #1 before I realized that I was in over my head and lost my nerve.

All last night, I had doubts about the yarn and needles. Which I ignored, because I absolutely always have doubts about my yarn and usually have doubts about my needles. This morning, I blocked what I had done and I've still got doubts. But I found better needles and I'm going to switch to them. Both sets are supposed to be the same size, so we'll see what happens.

As much as the yarn worries me, I'm in love with the pattern. So far (halfway through Clue #1) it's been easy knitting. I can see why so many people are knitting more than one.
Posted by Michelle at 6:00 PM

Why does the yarn worry you? What are your doubts?
It looks pretty from here!

People are knitting more than one? Wow! Yours looks really nice, though!