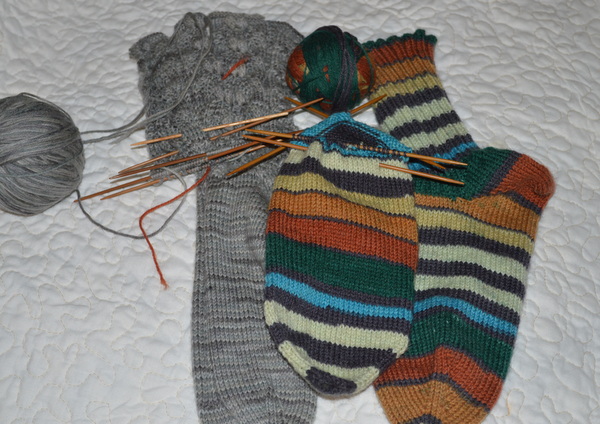 My sock knitting slump seems to have ended with the finish of that last miserable pair. As soon as they were done, I cast on with some Patons Kroy in Rusty Stripes. I wish I'd written down the date I started this pair so that I could tell you exactly how fast they're coming together. I've gone from the toe to the heel of the second sock in three days and the first sock moved just as quickly. That's not unheard of for me, but it's faster than I've knit in weeks.

I also cast on the second fly sock. One more repeat of the flies and I'll be able to move onto the heel and foot, which should be the easy part. (Hope I didn't jinx myself by typing that!)

Over the past couple of years, I've really come to love cozy mysteries. When I see a new book coming out in one of my favorite series, I jump at the chance to read it. From Bad to Wurst, the lasted Passport to Peril book was worth jumping for. It's always entertaining to watch Emily cope with her regular tour-goers. On this trip, the adventurous seniors are in  in Germany for Oktoberfest. Emily's mother and grandmother are always entertaining and in this book they're more fun than ever. I'd suggest starting this series with the first book so you can enjoy the character development, but it's possible to jump in with the more recent titles.

Paint the Town Dead, the second Aurora Anderson Mystery by Sybil Johnson, deals with a tole painting convention at a newly built hotel. Between the unexpected mid-class death of a local painter and angry neighbors protesting the hotel, the plot moves quickly, without as much emphasis on the characters and painting as there was in the first book.

When a local artist is found murdered, there are a number of suspects including the husbands of the women who modeled for his nude mermaid paintings (even though the finished work doesn't bear much resemblance to the real life women) and the man who's trying to buy his valuable piece of real estate. A Well-Crafted Alibi

by Cozy Cat Parker is short, but it contains an intriguing mystery and a cast of character that I'd like to read more about.

I'm linking up to Yarn Along and Patchwork Times. From Bad to Wurst and Paint the Town Dead were ARCs provided by the publishers. A Well-Crafted Alibi was a freebie from Amazon.

those socks are coming along nicely! I have 1 and half pairs to complete before the holidays then I can knit some for me or play around with some new patterns :)