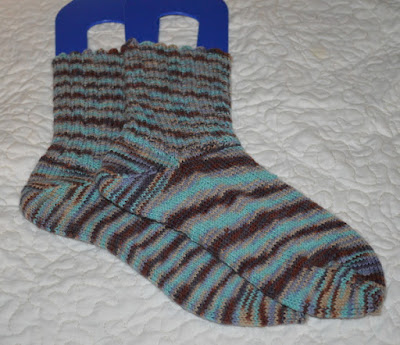 I think it's safe to say that I'm giving up on the new incarnation of Red Heat Heart and Sole. I didn't have nearly as many trouble with the Lakehouse socks as I did with the Bayou pair, but this stuff just isn't as nice to knit with as the other craft store sock yarns I've used. (Heart and Sole with Aloe is different stuff. I love knitting with it, but I've only got one color left in my stash.)

I usually use one skein for each sock so that whatever yarn I'm left with is evenly divided for my next project. This time, I finished the first sock while watching TV with my hubby and didn't want to get up and dig out the second one. The whole time I was knitting that second foot, I was wondering if joining a new skein would throw off those spiraling stripes. I solved the problem (or maybe there wasn't one) by switching to the new yarn just before starting the short row heel. It seems to have worked.

Between socks, I've been doing some reading...

A Head Full of Ghosts

by Paul Tremblay takes place fifteen years after the exorcism of Marjorie Barrett, whose story became a reality television sensation. Now a journalist is interviewing Merry, who was only eight years old when the tragedy unfolded.  At first the book seemed to have a lot in common with The Exorcist and every other exorcism book or movie I've read and watched, but there are other things going on in this story. I enjoyed this one.

This post is linked to Patchwork Times and Yarn Along. The book came from the library.
Posted by Michelle at 4:00 AM

Knitting is all Greek to me, but I love to see what other people do. My brain just doesn't go there, though I crochet. But you can't crochet socks, can you? I have a question. Why does everyone knit with a heel? Aren't the pull up tube socks easier than putting in a heel? And I like them better, too, because then I can distribute the wear on both sides and not wear out the heel! =) E-mail is on my sidebar.

Love the colors of your last pair for 2015. I missed what the yarn name was, but they sure are pretty. "Desertskyquilts" makes a good point about the evenness of wearing out a heel on tube style socks. Might be something to consider. You learn so much reading comments from other bloggers. Thanks for all your informative posts during the year. I love seeing what you are knitting.

Fabulous socks, I'm a fairly new sock maker but am getting addicted, my goal is to make a perfect pair of socks maybe in 2016! Happy New Year. :) x