Sometimes it's the Camera 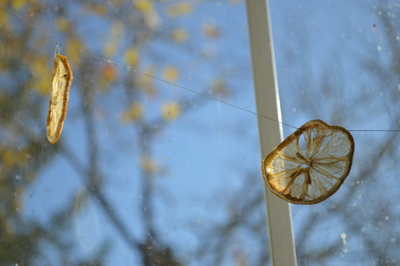 I saw a garland of dried orange slices on Pinterest. They looked so pretty with the sunlight shining through them and we had some lemons left over from a recipe that were getting past their prime. (Or maybe not, but that was how I justified using one of them.)

Here's what I learned from the project --

Next time, I should use a sharper knife and make more uniform slices of fruit.

Tying slices of  dried lemon on thread so that they're evenly spaced is harder than it sounds.

So is hanging them from a window frame with thumbtacks while four different family members wander through the kitchen asking what you're doing and why.

What I couldn't do was get a decent picture. I tried different times of day and different angles, blaming the light. It was later in the week that I figured out what was happening. My wonderful intelligent camera was focusing on the tree and blurring the fruit slices. Once I told it that I was taking a portrait, it focused on the fruit and blurred the branches. 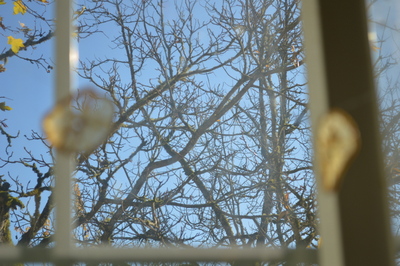 You have tried it and done that now. Once you learned how to take a picture of the lemons, they are cute. I try too many things that I see on line. Some get finished, some not but I keep on doing, lol. If it makes you happy, why not.