So far this year, we don't have any Christmas decorations up, not unless I get to count that pile of knitted stars and stockings waiting on the treadle sewing machine to have their ends woven in. When I do get around to making the house festive, we still won't have an elf.

What we do have is Evil Santa. (He's currently skulking around up in the sewing room, mostly for his own protection because his stitching is starting to look weak.) 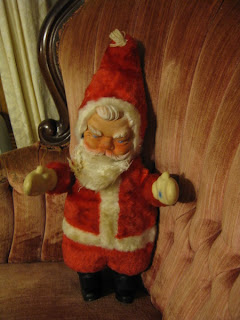 I've got to admit that I'm baffled by the whole Elf on the Shelf phenomena. When did this elf thing become a mandatory part of Christmas? How did I manage to remain so totally oblivious until last year?  I Googled it and found the Wikiipedia article, which solved that mystery. The elf came out in 2005, the year I spent December in the hospital on bed rest and managed to completely miss Christmas. The elf's debut slid neatly into the gap between my older two and younger two children and our family managed to miss it  completely.

Would we have an elf if I'd known about them when the kids were littler? I honestly don't know. When I was a first time mommy, I'm betting I would have jumped on the idea. But these days I'm lazier. Or I'm using up all of my mommy energy on things like possum costumes...  Isn't it great how we all have our own ideas about what we're willing to do for our kids?

The idea of hiding Evil Santa around the house is really starting to appeal to me...
Posted by Michelle at 4:00 AM

My kids are now 24,22, and 17. I'm very glad the Elf on the Shelf wasn't around when they were little. We had a hard enough time keeping up with the tooth fairy.

I don't 'get' the elf either. Good thing my kids are grown. They would not have gotten an elf on the shelf. My daughter is expecting, and I'm sure her child will have an elf. My son has a four month old. I hope they do not get an elf; that bugger will get into deep mischief if my son is in charge of him.

Oh, no! We have 2 of the same Evil Santa. They really scared us as kids. Recently the paint (or I should say, lack thereof) on the faces have added to their evilness! I think one of our Evil Santas ate Elf on the Shelf, because Elf is not in his box when I pulled out the Christmas decorations! Bad Santas! LOL!

Hiding bad Santa..,LOL! What a joy!
Maybe he could be doing naughty stuff, like getting into the cookie jar?
Esther
esthersipatchandquilt@yahoo.com
ipatchandquilt.wordpress.com

I grew up with the evil Santa. I think it is hilarious that each one seems to have a bit of a different expression. Just say no--To the Elf on the Shelf.

I have that Santa too (and a more rotund version as well), but mine does not look as evil, thank heavens. Mine looks to be in better shape, so that may have something to do with it! :-)

I think we discussed last year how we both have that same evil Santa. =)