two days 'til Christmas (or is it a day and a half?) 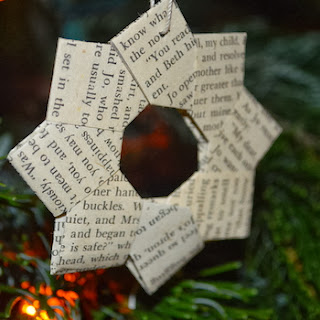 When I made the first batch of these little paper wreaths, I was worried about the inappropriate words that might turn up on my ornaments. The book I chose because it had wonderfully aged pages was an absolutely awful choice. I went looking for a better book....then, after it was too late for another shopping trip, I realized what I needed.

Harry Potter.  Because I know my kids. I know they'll read the ornaments -- so why not give them something they can identify? There are so many copies out in the world that cannibalizing one for the paper wouldn't keep anyone from reading it. (Now I'm kicking myself for tossing  a copy a few months back because it had lost the last chapter or so.)

I wound up with a battered copy of Little Women that I bought for a quarter from the Friends of the Library bookshop. They had Little House in the Big Woods, which would've been my first choice but I decided to leave the mostly complete set for some mommy who actually needs them to read to her kids. 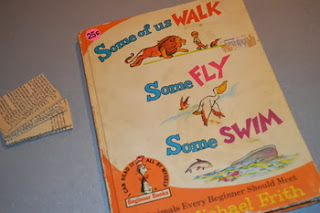 I'd found a tutorial for making ornaments from picture book illustrations and was sure I'd pinned it. Maybe I didn't, because I didn't have any picture books to cut up. Then I found this one at the Friends of the Library for a quarter. It was trashed. Torn pages...crayon marks...scuffed cover... I don't feel any guilt at all for cutting it up to hang on our tree. We used the oddest animals. Have I mentioned that my kids are big Animal Planet fans? 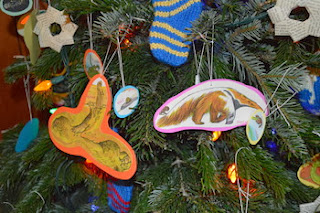 And we were lucky enough that the book had everyone's absolute favorites, even some bees for Hubby. 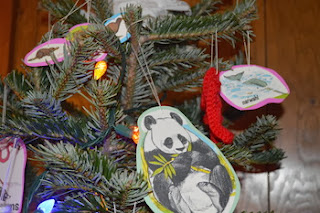 Cute! I have a couple of old paperback books, so I might try to make stars like yours. For next year. Today is a full day!

I made some of those years ago and used scrapbook paper in a style that might be interesting to the recipient... (I used mine as ornament/tags for packages. The musician got music paper, grandson got baseball paper... etc. It saved me from that problem you mentioned.
Hugs