Teenage Daughter and I got to talking last weekend and decided that if we really set our minds to it, we could make one of the most spectacularly ugly Christmas sweaters ever. Not that we intend to do it...but we could if we wanted to!  Then I read Madame Samm's post from this morning asking if we had ugly sweaters.

There is no evidence of my most hated sweater ever, the one that I planned to burn until members of the Knitlist convinced me not to because it would smell bad and ruin my fireplace. Not that I had a fireplace at that point in time, but I decided it wasn't worth convincing Hubby to help me burn it in the backyard. That was before my daughter proudly wore the thing to a knitting guild meeting and told everyone that her mommy had made it for her....shoulda burned it!

This one isn't that bad -- it's the face of the little boy who wore it for the two seconds it took me to snap the picture. I never had the heart to put it on him again. 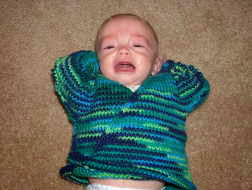 This sweater is the reason I learned to knit. The first attempt was so awful that there's no photographic evidence of it. This one, the second try, has also been disposed of. It looked worse in real life than in this blurry late night photo. 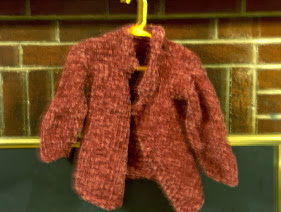 Those were the ones I was looking for when I stumbled across Heath's camouflage sweater. To get the full effect, you've got to imagine those zig-zaggy pooling stripes in motion on an active little boy. This sweater did get worn, out in the back yard where there weren't any witnesses. 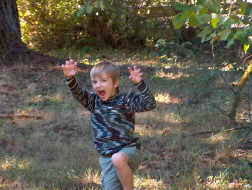 Now I'm wondering how many awful knitting projects I've suppressed all memory of over the past nine years. And I'm worrying just a bit about the sweater Alex wants me to knit for her.
Posted by Michelle at 1:40 PM

wellll ugly no….lol but scary yes especially your last little rug rat lol you are too funny…you may win this one lol