At least that's what The Doctor says, and what kind of mother would I be to argue with Doctor Who and my nine-year-old. He made himself a Fez out of duct tape. Bad mommy that I am, I thought I could make him something better. 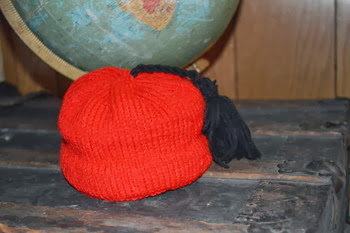 Ravelry has a lot of free fez patterns. Most are crocheted, or  felted. I wanted to use the  Red Heart Super Saver that I'd bought for the Christmas ornaments...so I went with the toilet paper roll cover. Acrylic doesn't block, so it's not as structured as I'd like. If it keeps bugging me, I'll make a cardboard form to slip inside so it'll hold its shape.

The tricky thing about making Christmas presents for the kids is that I have four of them. There are things I want to do for all of them -- there just isn't enough time.  I could start in February, but I'm not going to make something for a current passion and then pack it away, hoping the kid hasn't changed his mind by the time the next holiday comes around. (Remember Quinn's Green Trip Around the World?)

Leif got the possum costume for Halloween. Quinn is getting the fez for Christmas. Teenage Daughter wants a Weasley Sweater in Slytherin colors, with an intarsia "S" -- and she's enough of a knitter to realize that it's going to take a while. There are things I've seen on Ravelry that Teenage Son doesnt' know he wants, not yet at least. And they're going to get them when I finish them, unless it's six days before a holiday or birthday.

I'm going to have to make a matching bow tie to go with the hat, aren't I?

This post is linked to I Gotta Try That, Sew Much Ado, Finish it Up Friday, Can I get a Whoop Whoop?, Get Crafting Friday, Pinworthy Projects, and Freedom Fridays, Wonderful at Home, and Inspired Friday.

I too give my kids projects when they are finished. Projects that take a long time are harder to keep secret, and once they are done I want them to be used and loved.

I hope he likes it, though if he's that much of a die hard whovian to make one out of duct tape, I think he will. :-) Yes on the bow tie!