keeping track of the fabric

This has been my first year of keeping track of my fabric acquisitions. Not purchases, because at least half was given to me. And most of what I did purchase was dirt cheap. I think I've spent an average of fifty cents a yard this year, and that was on the nicer stuff. I bought very little new yardage.

And then there's this: 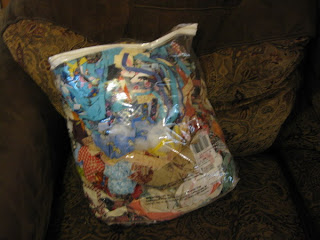 When I add up the fabric that I've used for the week, I only count what's actually in the finished quilt, not the little leftover bits that are too small to be strings or crumbs. I've been tossing those bits into a bag when I cut scraps, intending to weigh them and add that total to my yardage used at the end of the year. I don't feel quite right counting it as "fabric used"....but it's not thrown away, either.

So I've got twenty-four yards of trimmings, and 30 yards of fabric that I donated back to Goodwill because it was still useful, just not for quilts.

And then there's the yarn -- most of the unused yarn for this year came in one box I bought at an estate sale for four bucks. Do I really have to count that as yarn I bought but didn't use? I don't want to toss it, because it's decent stuff and I've got kids making craft projects. But if it gets used for whatever they're tying up, it doesn't get counted toward my totals....and I threw away a whole bunch of tangled stuff last week without even thinking of counting it.

Have I mentioned that my record keeping isn't 100% accurate? But it does confirm that I brought home much more fabric than I used this year.

To see more weekly stash reports, click over to Patchwork Times. And don't forget the Blog Hop Party and the rulers I'm giving away!
Posted by Michelle at 10:47 AM

You've done a great job keeping up with your fabric *and* yarn. I'm impressed! I think may try it next year; but from scratch. I don't think I'll include what I've already got in my totals (except for outgoing) LOL! Too hard to count! Maybe I should try stash reports with my button collection! :)