Chickens at the Crossroads

This red fabric was supposed to be chickens. I bought it to make a chicken quilt. And then I found something else I wanted to try, decided that I wanted to make it in red and yellow, and didn't realize until too late that I was using my chicken fabric. 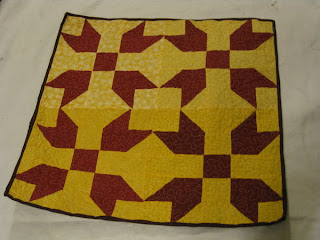 So I totally embraced the chicken thing and bought a chicken novelty print for the backing. And then it sat for five years because I wanted to quilt it with chickens and didn't know how to quilt at all. Now I can quilt, but I still don't know how to do chickens -- which I'm sure has a lot to do with the fact that I've never actually tried to quilt a chicken.

I pulled out the top a couple of weeks ago, dug out the backing fabric from the drawer it's been in since I bought it five years ago, and thought about trying something feathery.

And then the urge to get it done and cross another UFO off my list before the end of the year was stronger than the urge to wait until I could figure out feathers and I just meandered it. 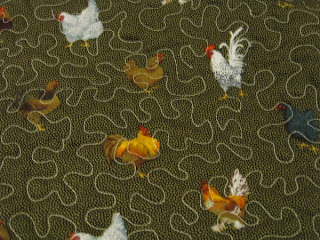 There seems to be a pattern developing here, one I'm not sure that I like. Last week's finish was supposed to be a bed size quilt, but I made it into a small throw with the blocks that I already had finished. Not because I didn't want to make a big version of that quilt, but because I convinced myself I'd never get around to doing it with those blocks.

Enough people are out there saying - to me and everyone else - that we're never going to do things. I don't need to start doing it to myself.

This post is linked to Finish it up Friday over at Crazy Mom Quilts and Confessions of a Fabric Addict.
Posted by Michelle at 6:37 PM

Labels: chickens at the crossroads, finish it up friday

Good for you in a finish. And changing gears actually keeps the mojo.

A finish is always a good thing! If it means modifying the plan a little bit, if is usually worth it to keep moving forward. Cute chickens!

I like the chickens and your quilting looks good! congratulations on the finish!

I like the look! And good for you, shaking off the negativity!! You're absolutely right! :)

Whoop Whoop! Good for you for finishing the project. So it's not what you had originally intended. It helped wipe the slate cleaner for a renewed effort on the next project! Smaller finishes build your confidence to expand your expertise the next time. You're going to be fine :D

Good for you! Looks great!

I LOVE that chicken fabric. I would have decked out my kitchen with some potholders from it. CUTE!! Spoken from a chicken lover.

i like your chicken quilt. i would imagine quilting chickens WOULD be hard. i've never tried, though! your meandering looks AMAZING! and i agree, changing gears mid stream sometimes is a sanity saver. It's nice to be able to go with the flow in a project.

thanks for linking up!