We're getting a new-to-us table and chairs, so I spent the entire afternoon in my sewing corner at the end of the dining room, trying to haul as much stuff as possible out into the "real" sewing room. The one without any lights or heat and with only one electrical socket, which makes actually sewing out there a remote possibility. 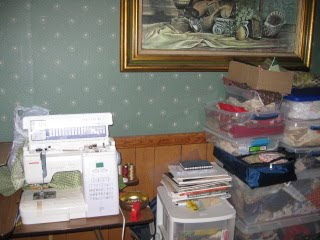 Once I got going, it was actually kind of nice to excavate the layers of fabric and patterns. I wound up with the room clear enough to swap furniture into and several new projects lined up.

I'm a bit less excited about the new table and chairs. I've been wanting a new set for quite a while now. The ones we've got were a gift from Grandma when we first got married nineteen years ago. They're not awful, but I don't think I've ever really loved them. Or maybe after nearly two decades I'm ready for a change.

Something happened during the last move and for the past years the once sturdy table has been getting more and more precarious. We've been shopping around for the perfect replacement, but other, more urgent, things kept needing to be replaced first and we still hadn't found our dream table.

Grandma knew we were looking, but also that she absolutely couldn't buy anything without Bill's approval. Then one of her dealers, who also knew we were looking, had a nice table and chairs left over after an estate sale and offered it to us for free. It sat at the antique shop for a while until we could drive up and take a look at it. She described it over the phone, the unusual way the pedestal splits when it opens up for the leaves, and the bit of carved decoration along the edge and it sounded like a normal table to me.

Now that I've seen it, I know why. It's the twin of the set I've been so anxious to replace. Except the stain is a bit darker and the new one isn't threatening to topple over at any moment.

What are the odds of that happening? On the bright side, the chairs from the old table are the same exact style. And this set is only supposed to be temporary, until we find our dream table.

It'll be another twenty years.
Posted by Michelle at 5:37 PM