The little boys have been helping me assemble nine patch blocks for the blue quilt this morning. If anyone has trouble sewing things together randomly, I strongly recommend having a four and five year old pick out the pieces. Once your convince them that the pieces can't match exactly and that they can't grab green fabric intended for another project, it works very well. 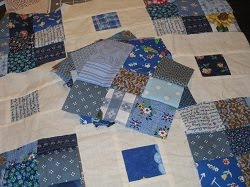 We got lots of good practice counting and taking turns and playing I spy with all of the different prints. And now I'm totally exhausted.

I did start out tired because I was up late putting together the madder snowballs. For some reason, I had washed the fabric for the backing but not the fabric for the border. And I didn't realize it until I'd already spent two hours piecing snowballs together and was ready to cut the strips.

No way was I going to bed before I knew for sure that the pieced border was going to fit! 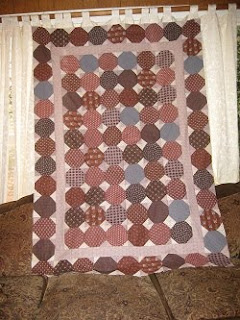 I can't wait to see how this one looks once it's quilted and bound, but if I'm ever going to get those last two quilts from my list of loose ends done, I've got to force myself to quilt and bind them first. It won't take all that long, but I've been avoiding it like the plague.

What is it with these snowballs? I thought I was through with them after making eighty-some for Simple Pleasures. Then I made a hundred more for this quilt. And now I've seen Red Hots.

But those aren't snowballs -- they're nine patches with half square triangles at the corners. Which isn't the same thing at all. I've got lots of red left over from the red scrap quilt, but not a lot of whites....but I *do* have plenty of lights and darks to play with... I could do something more like the one on this page. And I've got a bunch of light and dark 2 1/2" squares left from Simple Pleasures, which would give me a head start on the cutting.

I like this plan!
Posted by Michelle at 1:16 PM

Particularly love your blue nine patch quilt. I think it's wonderful that you involved your little ones in helping make it :)