Over at Stashbuster, they do stay-at-home retreats. It's a great idea, but my free time doesn't always match up with the rest of the group. The one time I did retreat on the same day as everyone else, I didn't realize it until later.

Since I do have time this weekend, I've been retreating almost all by myself. The "almost" is because Alex decided to try out her new sewing machine last night and is thrilled by how quiet it is and how it doesn't make the table bounce and has been working on her fish quilt all afternoon. I like this quilt. Except for occasional requests to cut a bunch more 2 1/2" squares, it doesn't involve me much.

Last night, I rented a couple of scary movies and then tried to figure out what I could get done while actually watching them. Over the course of the first movie, I assembled the top for that quilt I'm making my friend. 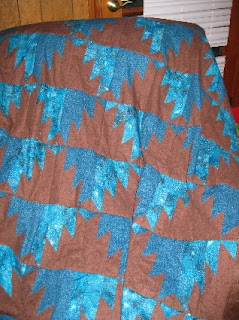 During the second one, I stitched around four more birds. I can't believe how much easier the Q-Snaps are making this. I'm still not loving it, but with only four birds left, the end is in sight. I should get it done while I watch the movie I rented tonight. 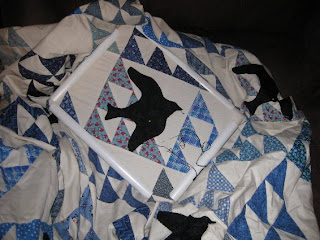 My big goal for today was to finish cutting the pieces for my scrappy Double Irish Chain so I could move the brown fabric back up to the sewing room. I got that done and pieced nine of the plainer blocks, then started working on checkerboard blocks. I suddenly have NO desire to work on this quilt! Maybe it should be my leaders/enders project while I work on the red quilt?

I got nine blocks for that one pieced, and sewed together the cloth portion of Tricornu. I never did make sense of the directions in the pattern, but I googled and found a bunch of tutorials for cross stitch versions that had enough pictures for me to figure out what I think I was supposed to do. I'm anxious to get it stuffed, but I want to use some chicken grit to give it weight (there was a whole discussion about chicken grit and different types of sands on one of the quilting lists about a week ago -- I didn't come up with this idea on my own!) and I'll have to wait for Bill to bring some in from the barn for me.
Posted by Michelle at 5:52 PM