I have new projects! Remember that list of six things I was excited to start working on? I've started knitting away at it.

Shrug This is done.

The Bed and Breakfast Pullover is swatched and cast on for the second time. The first time, I made a really stupid mistake with the set up row. 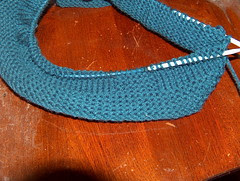 The Baby Cobblestone is swatched and cast on and I'm working my way up the body. Not in any big hurry, because it's not going to take long and it's good mindless TV knitting, at least until I get to the yoke and have to figure out the decreases. 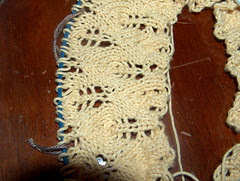 The Candleflame Skirt is about three inches long and, as long as I don't run out of the unidentified yarn I'm using, it's going to be a fun project. The lace pattern is an extremely easy 10 stitch repeat and the rows stack up in a way that makes sense. I'm not sure why the designer recommends putting a stitch marker after ever single repeat. Of course, now that I've typed that, I'm jinxed and will do something so stupid that I have to frog the whole thing.

I was going to start the striped garter stitch sweater yesterday, but put the magazine someplace safe while I was in that housekeeping frenzy. sigh

And I keep making new excuses not to cast on the Reversible Rib Shrug, even though I'd like to have it done so I can wear it. I don't think I know where the yarn is... I'm using the needles I want to swatch with for something else...that provisional cast on makes me nervous...
Posted by Michelle at 1:31 PM

Looks like you've got some really cool projects going! Hope they all turn out beautifully for you!