I like watching leaves fall past the big picture windows, but this afternoon Leif was pointing at them and saying "eeeewww!" That's one of his favorite words, right up there with "ow!" and "bite?"

Bill's theory is that since the leaves have fallen onto the ground, Leif thinks they're garbage. I don't know what's going through his little head, but it's sure cute.

Today's been a good day. We drove to the feed store and bought huge pumpkins, then stopped at Costco to pick up a pumpkin pie on the way home. The little guys didn't nap, so it's almost bedtime and I rented a couple of movies to watch while I knit. Maybe I can make some more progress on Presto Chango.

Now that Cobblestone is done, the Knitting Needle Knitting Bag is going to take its place as my mindless TV knitting. At least until I cast on something new. 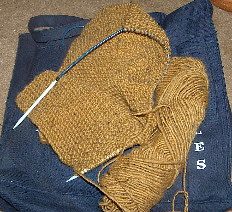