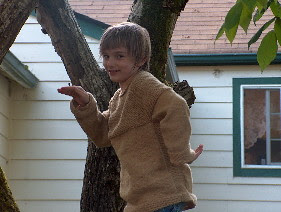 It took three skeins of Sierra Pacific Accord, which I picked up for $1 a skein at Craft Warehouse last Christmas. Cheaper than Red Heart Super Saver, and about as much fun to work with. Not saying that's a bad thing, just that the two yarns are in about the same league.

I like this sweater. It could've been better if I'd used nicer yarn and actually adjusted the numbers instead of just working at a tighter gauge, but I'm not starting over at this point. And Heath loves this sweater, which is what matters.

The pattern is easy and was fun to knit, but it did convince me that I'm not a huge fan of knitting garter stitch in the round. I'll do it if I like the pattern enough, which in this case, I did. 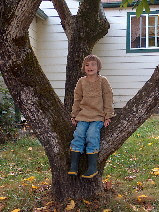 It's also occurred to me that with the same amount of energy I'm spending to make Heath these over sized sweaters, I could just about make one for myself.
Posted by Michelle at 6:19 PM

He looks adorable in his new Cobblestone! What a great idea - turning it into a child's sweater!!