There's something in the air and I think it's wool.

Yesterday, I met a wonderful lady named Terry who gave me eight pounds of raw fleece (I found her through a Freecycle listing) and then offered to teach me how to use my wheel.

Today, while I was loading the kids into the van after getting their picture taken with the Easter bunny, a member of the knitting guild who we haven't seen in ages came up and we had a brief but fun conversation about what we'd been up to and what we were knitting. I had came SO close to wearing Ester to the Ester egg hunt but didn't put it on. Now I'm kicking myself, because it would've been so much fun to show it off. 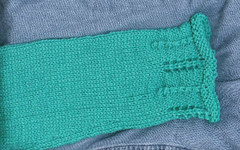 I've got the first sleeve done on the fast stockinette cardigan, then one more sleeve to go and it won't be quick stockinette anymore since the body is done in a pattern stitch. At least it's an easy pattern.

What I'm thinking I really want to knit is a Weasley Sweatter for Heath. Because he named the stuffed penguin he got for his birthday Ron Weasley. I talked myself out of knitting a sweater for the penguin.
Posted by Michelle at 7:38 PM

I like the sleeve a lot. What a pretty cuff! What sweater are you knitting, exactly?