I did have plans to go out this morning, but after hauling the kids all over creation last night and Friday and I don't know how many days in a row before that, I couldn't face even a couple of hours out in the world. So we stayed home and the kids watched a couple of DVDs while I worked on my quilt. 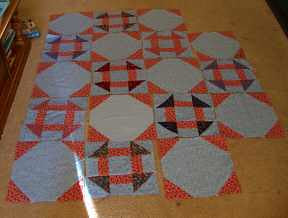 It'll look cuter once the five little monkeys are appliqued on it. I hope.

This quilt does not want to exist. I've cut the fabric wrong -- seven or eight times so far. I've sewed pieces together backwards and then not realized it until I trimmed the seams and it was too late to fix accurately. I've cut the fabric exactly the way the directions told me to and then had it not match up with the other pieces of fabric. But I'm going to finish this thing and I'm not going to go back for more fabric to do it with. If that means extra seams running across the edge of a couple of blocks so I could make the fabric I cut too narrow wide enough to cut those blocks from, I'm fine with it.

I've got four more of the monkey wrench blocks to make, and I think I've got just enough bits of the blue and red to make them work. Not sure what colors I'm going to use for the corners, but I'll find something. It needs some black.

This whole thing has me feeling all happy and productive, especially since I've got an entire evening stretched out in front of me. I could finish those four blocks, or work on the boring part of Alex's cardian, or cast on for something new because I've suddenly got a second set of Denise needles!

Friday Mom and I (and the kids, because they're always where I am) went up to Portland to spend my birthday money and stopped at the little quilt shop that belongs to the same company who runs Knitpicks. There were a few neat odds and ends of yarn for $1 a skein and sitting right there on the shelf was a set of Denise needles with a $15 price sticker on the front. I seriously expected it to be just an empty case, but there was a complete set of needles inside.

I'm still trying to figure out what it was doing there for that price. Obviously it was lost and unwanted and needed to come home with me.
Posted by Michelle at 7:31 PM

Nice quilt, too. I hope it turns out well!