I love Flash Your Stash time! It's so much fun to look at what other people are hoarding, even if it is getting a bit harder to find knitters with more yarn than I've got. I know they're out there -- maybe they're knitting with their yarn and not taking pictures of it.

This is the third year in a row I've done this -- even if I am late this time, and it is only a partial stash flash. I'd planned to get all of my yarn organized and take nicer pictures than I managed in 2005 and 2006.

That didn't happen. The first of April snuck up on me and I didn't think I was going to get pictures at all this year, then I got an unexpected sliver of time, got the kids set up watching Eragon, and ran up to the sewing room to do another quick sort and pile and photograph. Something is better than nothing, right? And if some awful catastrophe does strike, my Flash Your Stash pictures would prove that I actually did own such a ridiculous amount of yarn.

Yes, I'm still traumatized by that break in we had a year ago while I was in the hospital trying to delay having Leif. No yarn was taken, but that's only because it was the first thing I moved into the new house, along with the baby pictures and my wedding dress. I had a nightmare last week about coming home and finding that the shop and sewing room were totally empty -- not just empty, but like something from a burned out horror movie set -- and the sick feeling stayed with me for a couple of days.

But on to happier things -- here's the yarn! 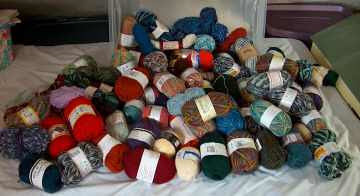 I've got acrylic coming out of my ears --

My definition of good acrylic is yarn I bought new at Walmart, or yard sale yarn that's nice enough to make a sweater out of. The rest is in bins or plastic bags or heaven only knows where. Trust me, there's plenty of it! Most of this is meant to make sweaters for the kids. 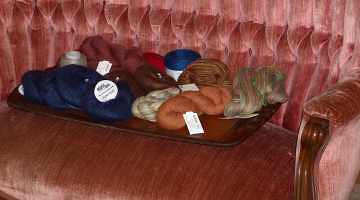 I seem to be missing almost half of my laceweight, but the fact that there's so much gone is reassuring. I must've put it somewhere safe.

And I've got a bunch of yarn that wouldn't pose nicely for photos here if you really want to see most of the rest. Lately, I only go up to the sewing room long enough to rummage around for whatever I think I need, so it's a mess. But it's my mess and I love having a spot where I can spread out my yarn and know that no one will tie it around the table legs using the method Alton Brown just explained for tying up a cut of meat.
Posted by Michelle at 7:01 PM

Nice Flash!!
You possibly have me beat for sock yarn, but I have WAY more sweater yarn!! I have so much that I'm not even tempted (very often) to buy more.

Better late than never!!! Look at all that sock yarn!!!

I just drooled a little...

I was just lamenting the size of my hoard in my latest posting. Now I don't feel so badly! :)