More Digging Through the Sewing Room

In case anyone noticed that there were two posts on Sunday and none on Monday, I had a post written for each day and manged to schedule both to post at the same time on Sunday morning.   By the time I found the problem they'd been up for eight hours I figured it was too late to try fixing it. I check and double check and sometimes I still get it wrong.

Monday afternoon, I dug around in the sewing room for the box of cross stitch kits that might or might not exist. I know that I'm missing at least two kits (three, if you count the old crewel kit that I'm sure isn't in that box.) Over the weekend, I saw another kit on Instagram I'm pretty sure I might have bought at some point... that seems like more evidence that there could be another box, right? 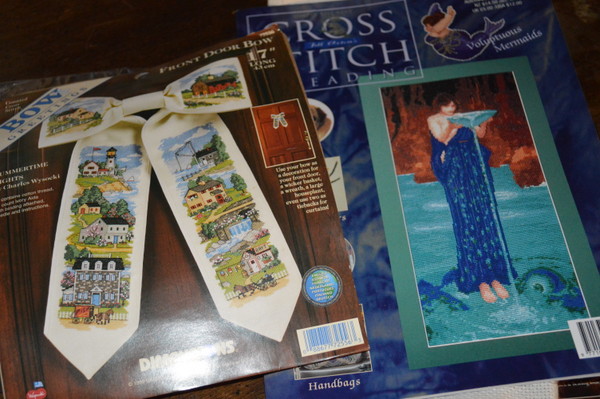 I knew that there was a box of projects I'd kitted up, and some UFOs that might or might not be in that same box. I've been trying desperately to find Circe (the one on the right) and had found the floss (the only time I've bought that brand for a project, so it had to be hers) and what I'm reasonably sure is the gridded fabric and --finally --  the magazine. All in completely different boxes for some reason. In the same box as the magazine was the bow kit. I know that at one point that one was in my sewing box, so I'm not sure how or when it migrated back.

When I found them, the boxes were in the far corner behind the built in desk, which meant that to get to them I had to clear everything off of the desk and crawl over the top of it. If I broke my neck, the boys would come out to look for me eventually wouldn't they?
Posted by Michelle at 4:00 AM