I don't think I've ever showed you the chair from my sewing room. It's probably appeared in the background of a few pictures over the years but it's intriguing enough to deserve a post of its own.

The thing came with the house and it's ridiculously heavy so the sewing room was where I found it and the sewing room is where it stayed until I dragged it outside to take some pictures where the light was better. 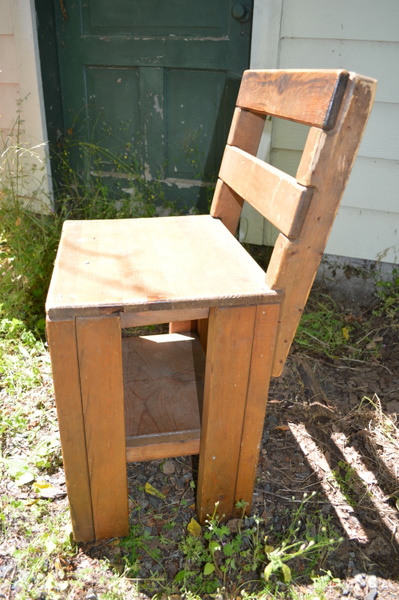 Someone obviously made it and that someone obviously had the same "that's good enough" attitude that occasionally allows me to do things like lop off the corner of a quilt because the backing wasn't quite the right size. 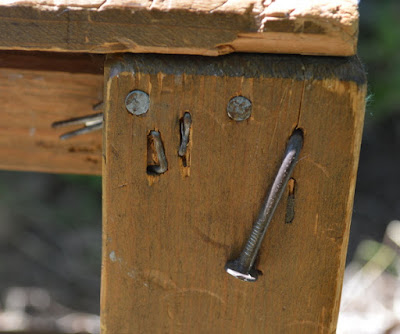 The back is bolted in place and there were notches cut to fit the slats. It looks like this thing started with a plan and some idea of craftsmanship... I don't know what happened to make bending down nails with the hammer seem like the right thing to do.

And I don't know why that shelf underneath needed to be two boards thick. But it does make a nice place to stack quilting books. 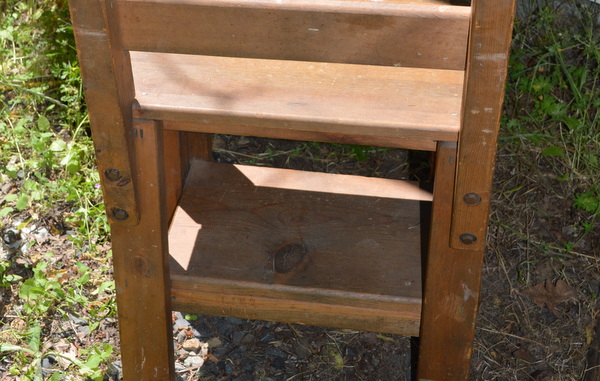 Maybe, given the blood thinners, I should see if Hubby can remove the worse of the protruding nail ends. I've managed to go ten years without cutting myself on one, but these days tin foil makes me a danger to myself.
Posted by Michelle at 4:00 AM

That is a heavy duty chair! It doesn't look that comfortable, though, it looks like it needs a cushion or two.

I agree, it looks sturdy but uncomfortable.

WOW. Maybe the maker was using what was available and that was it -- big nails and thick lumber. Sometimes I use things that I have handy instead of going to the store and "trying" to find what would be more acceptable. I agree about the comfort of it. It is crying out for a large, firm but soft cushion/pillow made with some of your great fabric from stash -- a winning combination for all. It will help with stashbusting and keep your buns happy for hours, so more sewing time. lol

Here's a thought. It's time to replace that chair! LOL At least pad it with something quilty. You can always put heavy duty duct tape over the nails. That'll make it more attractive, too. LOL Okay, enough making fun of the poor chair. I'm sure it's very useful and it won't fall apart any time soon, so it has some good points, too.