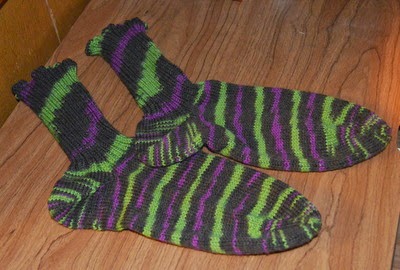 This is Knit Picks Essential in Meadow Multi. A few years back, I saw a picture of the skeined yarn in a catalog and had to have it.... I did cast on and start a pair of socks and then that false start got buried in an unused knitting bag for a very long time. 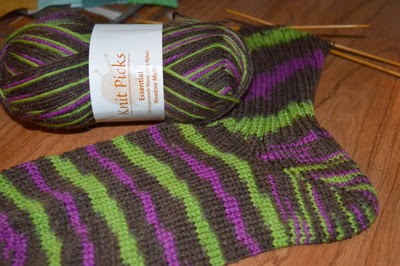 When it turned up, I'd already pulled out the needles to start another project. I frogged what was there and cast on again. Four days of high stress knitting later, I was half an inch away from a finished sock. Five days after that, I had a finished pair.

Angie Curtis is called home to her grandmother's house in Harbor Haven, Maine, because her mother, missing since Angie was ten years old, has finally been found, dead in a local man's storage locker. When the man who represents Mainely Needlepointers, the business started by her grandmother and a group of friends, drops dead in her grandmother's guest bathroom, Angie finds herself with two unrelated murders to solve. Twisted Threads

presents a pair of intriguing mysteries, and Angie is deeply involved in both of them.

For more pretty knitting projects to drool over, check out On the Needles at Patchwork Times. For more finishes, check out  Finish it Up Friday, Can I get a Whoop Whoop?, and Freedom Fridays.

Disclosure -- The publisher provided me with an ARC.
Posted by Michelle at 4:00 AM

Love the cuffs on these socks.

Those are such a snazzy pair of socks. I can't believe you waited so long to finish them. Love the way it pooled at the top. Was it a K2 P2 leg pattern?

I feel your pain! And I'm so glad you finished the pair!! I currently have three socks knit... and no plans for finishing the fourth ;)

How cool to find an old project and see it to completion. Also, I LOVE that yarn and the socks it created (with your help). I just got some hand died yarn that looks similar and it will be my next socks to start.