The Problem with Challenging Projects...

I'm sick of mindless stockinette and k2p2 ribbing. I wanted a challenge. But it's quite a jump from a project where the whole thing is in my head to this... 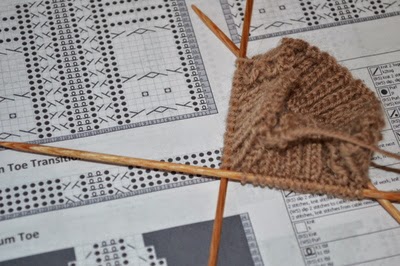 This sock has five charts -- the cuff, the leg, the heel flap, the toe transition, and the toe. Yikes! I'm two repeats into the cuff ribbing and already starting to wonder how much I want a cute pair of socks with owls on them. Two repeats through the cuff, I can finally see where the stitches are supposed to fall. That makes it easier.

But that mindless stockinette is starting to look fun after all.

Starvation Heights: A True Story of Murder and Malice in the Woods of the Pacific Northwest

tells a sad true story. British Heiresses Dora and Claire Williamson were searching for their mostly imagined illnesses when they learned of the fasting cure practiced by Doctor Linda Hazzard. Locals called her sanitarium Starvation Heights  and many of her patients, especially those with money and no dependents, died as a result of her methods. Before Dora manages to send for help, her sister Claire has starved to death and Doctor Hazzard has taken control of their jewelry and bank accounts, having declared Dora incompetent and made herself the woman's guardian.

The actual story fascinated me -- how could two healthy, educated young women fall prey to something that crazy? -- but the second half of the book, which covers the trial, dragged on and on.

OMG!!! Those are just the cutest socks ever. AND I collect owls and ladybugs, so these would be perfect for me too. BUT, one small problem, I am still learning to do socks one at a time, top down on 5 dpns. I will put these WAY BACK on the BACK BURNER for some future decade. lol
I love the little beads in the owls eyes too.