{Yarn Along} A Taste Fur Murder & When Shadows Fall 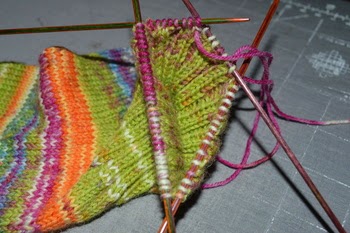 I've been knitting, really! The pattern repeat in this sock yarn are so long that it takes forever to hit a new color -- but I think I'm finally going to get some pink. I'm tempted to pull out another project just so I can look at yarn that isn't green, but I keep plodding away on the two pairs of socks and the sweater. I've got to finish them sooner or later, right?

Wow! I'm not sure quite how to describe A Taste Fur Murder

, first in the new Whiskey, Tango & Foxtrot mystery series by Dixie Lyle. "Zany" is probably the best word for this one, or maybe "madcap"...  Deirdre "Foxtrot" Lancaster is the personal assistant to wealthy Zelda Zoransky. She spends her days running Zelda's mansion and private zoo and is used to all sorts of crazy goings on -- but when she starts seeing the ghosts of animals in the estate's vast pet cemetery, even Foxtrot isn't sure how to handle it.  Then Tango, her dead cat, appears with an ectoplasmic dog to warn her that someone on the estate is going to die.

If you like your mysteries to be plausible, this one probably isn't for you. I enjoyed it, although I'm still not sure how I feel about Topsy the electric elephant.

by J. T. Ellison begins with a letter that Dr. Samantha Owens receives from a stranger, asking her to solve his murder. Timothy Savage's death has already been ruled a suicide, his body prepared for cremation. Following his strange request and the terms of his will, Samantha performs an autopsy and discovers that his suicide was actually murder. DNA evidence shows that another murder victim, a young girl who was abducted and whose body was recovered many years earlier, was present at the time of his death.  I didn't realize that this book was part of a series until I was already partway through, so I'm missing most of Samantha's backstory. Despite that, I was able to enjoy the story.

Disclosure -- The publishers provided me with electronic ARCs.

I think your sock yarn is very pretty. Wish I had one like that. At least you have color surprises coming up now and then unlike me with the same color throughout. Wish I were a faster knitter.

That sock yarn is so springy and so pretty! Socks take me forever, too.