{Yarn Along} The Innocent Sleep

I'm still knitting a pile of green things. I'm making progress, but it sure doesn't show in the photographs!  I did find another project that I want to cast on, a little challenge that I've got the right yarn for. It's going to be green. I'd change the color, but it's an animal. 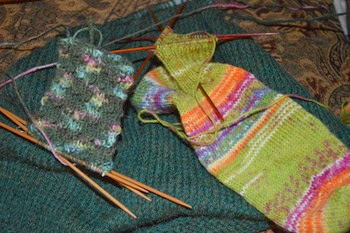 Leaving small children unattended....The odds of something catastrophic happening in just a few minutes are slim,  and who could even imagine an earthquake swallowing the entire building? That's the premise of The Innocent Sleep by Karen Perry.

Harry is preparing a birthday dinner for his wife when he realizes that he left her present behind while running errands. Their three-year-old son is asleep and, instead of waking  the little boy and facing the task of getting him settled down again once they return home, Harry slips out alone to retrieve the gift. He's only a few blocks away when the earthquake hits, but by the time he reaches their street, the building is gone.  Five years later, Harry glimpses his son in a crowd and becomes convinced that Dillon is still alive.  I found myself disliking both Harry and his wife and, unlike other books I've read recently where I hated the characters but was anxious to see what happened to them, I couldn't work up much enthusiasm for their fate.


For more pretty knitting projects to drool over, check out On the Needles at Patchwork Times and Work in Progress Wednesdays at Tami's Amis.

Disclosure -- the publisher provided me with an electronic ARC.
Posted by Michelle at 4:00 AM

Your knitting looks like spring. I'll be looking forward to seeing your finishes. I have left a few books early due to a disinterest in the characters' outcome. If the story is just not that interesting, I say why bother, life is short and there are plenty of great books out there!