Little Demon in the City of Light 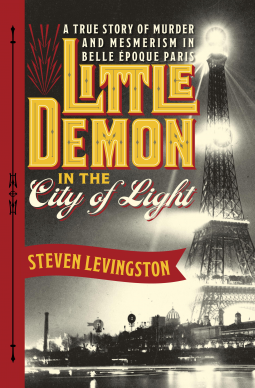 Could a man or woman under the influence of hypnosis be commanded to commit a murder? If that was possible...would the hypnotized person be guilty of the crime, or an innocent tool no different from a gun or knife? That's the question at the center of Little Demon in the City of Light: A True Story of Murder and Mesmerism in Belle Epoque Paris

. Gabrielle Bompard claims that, although she lured Toussaint-Augustin Gouffé to her rooms and placed the noose around his neck, she was not in control of her actions. According to Gabrielle, her abusive lover Michel Eyraud, who kept her in a state of almost constant hypnosis, was responsible for the man's death.

It always amazes me how much interesting information I absorb while reading nonfiction about historical events. The French press...the early study of neurology...the early days of forensic investigation... Prior to reading this book, I didn't know much at all about the belle epoque. It was a surprise to learn that they were still using the guillotine in the late 1800s (and even more of a shock when I looked it up on Wikipedia and learned that the last  guillotining was in 1977!)

If you enjoy historical true crime, I definitely recommend this one.

Disclosure -- the publisher provided me with an electronic ARC

I just read a review in this morning's paper--I need to read this book!!