I've taken the tour of Seattle's underground city a couple of times, once as a child and then again with my husband and kids. The whole idea fascinates me. More recently, I heard about the tours of the Shanghai tunnels in Portland -- and that there are tunnels under Salem. It's starting to seem like there are tunnels everywhere. 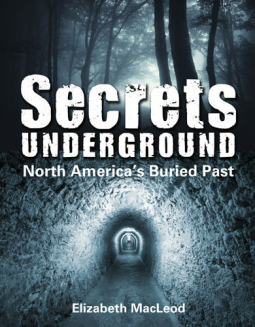 by Elizabeth MacLeod gives you a chance to explore a few of them.  The chapters tell the stories of abandoned ships buried beneath San Francisco, a formerly top secret government bunker built under a  bustling resort, and immigrants who were forced underground by taxes they couldn't afford to pay.

I didn't realize that this was a children's book when I accepted it for review. Honestly, I learned just as much from reading it as I do from a lot of adult nonfiction. I think my boys would love it, but I'd caution parents that it covers some aspects of history that aren't exactly pleasant to think about. I know history (not to mention the nightly news) are full of awful things, but I'm not always expecting them in a book meant for kids. You might want to read this before handing it over, if only to prepare yourself for possible questions later.

Disclosure -- I received an electronic review copy from the publisher.
Posted by Michelle at 4:00 AM

sound interesting to me, i will have to look for it.

I have been to the Porltand tunnels....more like Old town building basements but it was still an interesting bit of history. I still want to make it to the Tunnels in Pendleton.