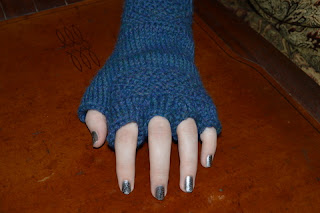 I can cross fingers off of the list of things I've never knit before -- along with the Lateral Braids and Linen Ridge Stitch I've already learned as part of this project.  That's all of the scary stuff I was fussing about a couple of weeks ago. Now I've just got to do them all over again for the second one...
But I can do that. These are the most successful knitting project I've had in ages that wasn't a NICU hat! 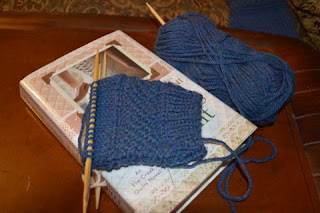 I'm slogging my way though The Wedding Quilt

by Jennifer Chiaverini. At this point, I've completely lost track of what order the Elm Creek books go in and which ones I've read and I'm not sure I want to put in the time and effort to figure it out. Not if the past two books I've read are an example of the direction the series is headed.
I'm biding my time until tomorrow, when I should be able to pick up the first book in Joanna Campbell Slan's Southern Beauty Shop series, which I didn't know about because they're written as Lila Dare. (If you're a fan of her series, you should check out the free short stories that she's offering on her website until January 15.)
For more fun projects to drool over, check out On the Needles at Patchwork Times and Work in Progress Wednesdays at Tami's Amis.

I was just telling my DD the other night that I'd love to knit some of these. Yours turned out great!

Now how nice is that - I love it! I have some wrist warmers that my friend in England knitted for me, I wear them all the time.

I'm not happy with Jennifer's books lately either. The first ones were the best, I believe. I'll have to look for the Southern Beauty shop series, thanks for the heads up!