Have you seen Judy's newest idea over at Patchwork Times? Every week, she's going to challenge us to work with a new ingredient.

I think I've mentioned that cooking isn't my strong suit. But this week is spinach -- and I do have a spinach recipe in my limited arsenal! 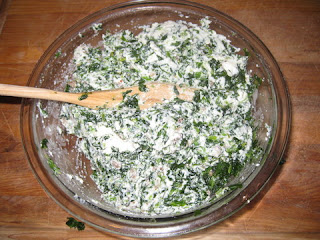 Thoroughly cook the sausage.  Boil the spinach until cooked, then drain thoroughly. You want to get out as much of the water as humanly possible -- I squeeze it out through a clean kitchen towel or thick layer of paper towels.  Mix the spinach, sausage, and ricotta cheese. Depending on how salty your sausage is, add salt and pepper to taste.

The original recipe, which I've adjusted so many times over the years that I can barely remember what it was, called for you to stuff the filling into a hollowed out loaf of French bread and bake it. Which was seriously yummy. But the kids and I use it as a spread on flour tortillas.

The proportions vary depending on who's eating and what kind of mood I'm in. Hubby was having lunch with us yesterday and he and Teenage Daughter don't like sausage, so I cut back on that. If I'm trying to be good, I  use more spinach and less cheese.

This post is linked to  What's Cooking at Patchwork Times and WFMW at We are THAT Family.

This is something my grandgirls will love - we will be having this at our next sleep over. Thanks for sharing.

This looks yummy! I will be trying it out the next time I need a dip for a church function.

Putting it in bread does sound especially yummy! Cheers! Evelyn

The bread idea sounds like something I would love to do.