you ARE going to do that!

One of the 87 million things on Pinterest my teenage daughter has called me over to look at was a supposed-to-be-cute quote about how it's a wonderful place to plan things you're never going to actually do. I've seen the same thing said about Ravelry queues.

It bugs me the same way that it bugged me when someone at my baby shower was carefully folding wrapping paper so I could use it to line the baby's dresser drawers and someone else piped up with "Not that she'll ever get around to doing it."

It was a mean thing to say. I never claimed that I wanted to line my dresser drawers with wrapping paper. The woman who said it did not know me well at all and had no clue what I might or might not ever get around to doing.

As far as I'm concerned, we get to carry as many plans and crafty dreams as we want inside our heads. Until we go out and spend money on patterns and supplies, we're not the slightest bit committed. If those supplies can be used for other projects, we're still not committed. And if now and then our plans change and a kit or pattern doesn't get used -- so what? We could've wasted that same money on a dress we never wore.

This week, I actually followed through on some of my plans. We made erupting soap. It's an actual science project because the moisture and air in the soap expand like the moisture in popcorn. But in addition to that, its really fun and, whether you have little kids or not, I think you should get a bar of Ivory soap and try it out yourself.

I also ran my nasty shower curtain through the washing machine with a cup of baking soda. It's white again. I can't tell you how shocked I am that it's white again.

This morning, I tried Jo's Easiest Egg Bake. It's been on my mental list of things I want to do for months. It really is the easiest egg recipie ever. I popped it into the oven before my shower and it was ready to be eaten when the kids were ready for breakfast. And, unlike the baked oatmeal we loved so much, there's no actual recipie to remember. 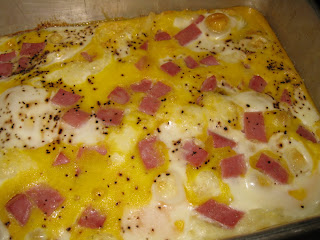 How about you? What have you been meaning to do? Are there a couple of quick things on your list that you could just do this week?
Posted by Michelle at 9:49 AM

Remember how years ago we used to cut pictures, crafts, recipes, decorating ideas etc. out of mags and put them in folders? I think that is what pinterest is like except instead of mags and scissors we are using the internet. Same concept - less clutter! LOL

was your shower curtain plastic?? vinyl? my kids have a nasty white curtain now, it's like orange at the bottom now. eww, I usually buy a new one....
I would love to do so many things but don't have the energy nowadays.

Very well put! I'm going to dream as much as I want to, and no snide comment will stop me. Anyway, I just know that some of those ideas will come about in one form or another!