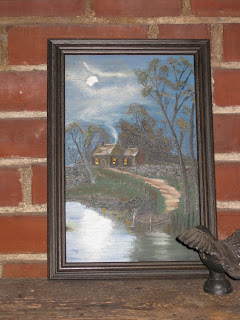 I spend a lot of time wondering about this little painting which sits on our fireplace mantel. It'll be moved as soon as we start thinking about fires again, but for right now I want it where I can see it often.

When I was growing up, it hung in the laundry room. I knew my great-grandmother (the mother of the grandma who found me my treadle sewing machine and all of those fabulous scrap bags) had painted it, along with the waterfall that hung at the top of the stairs. I knew that it was going to be mine someday. But that was about it.

No one ever told me -- and I never asked -- that this was painted in 1905, when Great Grandma was seventeen. I didn't find that out until the painting came to live with me a few months ago and I saw the date written on the back.

When she was seventeen.

I still have a hard time wrapping my head around that information, almost as hard a time as I have wrapping my head around the idea that her father in law fought in the Civil War. Great-Grandma as I knew her crocheted afghans and made swans with sparkly beads pinned into bars of soap. There's at least one quilt I know she made, and I think she made one of the two double wedding ring quilts that formed my earliest ideas of what a quilt actually was.

Grandma has filled in some of the blanks, telling me that the scene in the picture probably would have been an example from a book or a class and not an actual place that Great-Grandma knew. It was probably painted on slate, because that's what they used then. I'm not taking the paper off the back to find out for sure.

This post is linked to Time Travel Thursday, Ivy & Elephants & Vintage Thingie Thursday.
Posted by Michelle at 5:02 AM

What a great vintage painting so full of great family memories. I can see why you have kept on display.

That is so neat to have a painting your great-grandma did as a girl. Precious! I'd definitely keep it out too!

I already loved the painting - - - but the story makes it PRICELESS!

The painting is amazing...but add the story and well it is priceless for sure!! Happy VTT

Oh my goodness, what a treasure you have!

You've got a sweet piece of your family's history and a lovely work of art in one treasure! :)