Today has been my day for finishing the Christmas projects. Except for one last button that I need to find and sew on, I am done!

The button is for the flap of Dad's iPod cozy -- one of the few things I swore I'd never ever knit, but he's getting an iPod for Christmas, and has been having so much fun with it and its accessories and is so hard to buy for, it seemed like the perfect gift. 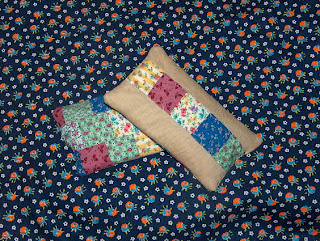 The eye pillows are stuffed and whip stitched together. I started out trying to follow a pattern by a big name designer, but didn't really like her patchwork and while I was digging through my stash and trying to figure out what it was that I wanted to do for mine, I came across a bunch of one inch squares left over from my unfinished tea pot quilt. Two nine patch blocks side by side were about the right dimensions, and then I still had squares left over, so I did a strip of them across the back. And then I felt like I needed a layer of batting in there, and if I was going to go to all of that trouble, I really should quilt them... The only thing from the published pattern I did follow was the size.

I've wanted to make something like this forever, but was intimidated by the flax seed, which sounded hard to find and expensive. It's cheap. Really really cheap. Almost cheaper than the powdered sugar I bought for the mints we also made this morning.

Grandpa's mittens are all seamed up -- 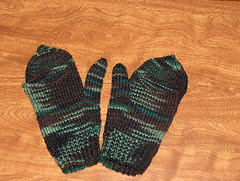 And since I was on such a roll, I decided to seam up that little purse from 101 Designer One Skein Wonders. It's still going to get a lining, but it's no longer a curling tangle of reverse stockinette and I cord. 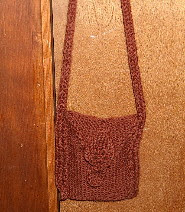 Now I can try to figure out what I was working on before I put aside everything else for the Christmas stuff.
Posted by Michelle at 4:24 PM

That looks like a great flip top mitten pattern- I'm always looking for new ideas on those since that what everyone in my family wants lately!
Good job on finishing up things!