It's enough to make me feel like a competent homemaker and not a flake who, after doing the same dumb thing at Thanksgiving, didn't stock up on diapers a week or so before the big last minute shopping frenzies. Costco actually wasn't bad -- everyone was in the toy section at Walmart where I had to be too, because Heath was desperate to spend the $5 gift card from his Sunday school teacher. 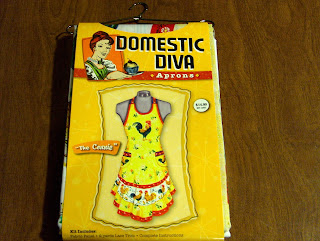 Isn't it going to be cute? I've been wanting something like this for quite a while now, because I always slosh water down my front while doing the dishes. And I get to make this one myself. And I had a 40% off coupon, so it was only eight bucks. And it has a chicken on it.

I'd rather be sewing an apron than wrapping those last few presents. But I don't think rest the family would agree with those priorities, so as soon as I'm done typing this, it's time for another round with the tape and scissors.

I've got an hour before the rest of the family shows up and, except for the wrapping, things are pretty much as done as they're going to get.


I was absolutely not going to get into one of those "finish all my WIPs before the end of the year" frenzies, but it happened anyway.

First, I was going to finish the things that just needed felting, or seams, or little things like that. So there went half the WIP list.

Then I started picking up the Sasquatch shawl, and somehow knit my way through 300 yards of sock yarn in two and a half days. 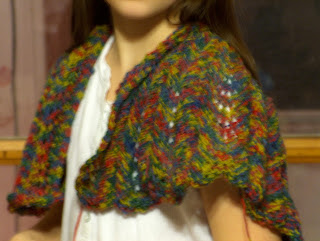 And now it seems silly not to finish the Rabbitproof Scarf and get it over and done with...
Posted by Michelle at 5:32 PM