Yarn and Another Cow 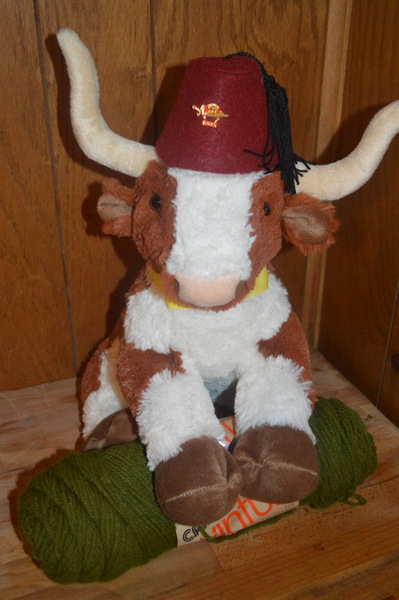 It was an accident that I'd gone more than four and a half months without a single yarn purchase. A couple of times, I've had yarn in my hands and talked myself out of it because it wasn't all that special or exciting. The theory is that sooner or later Knitpicks will introduce new colors or someone else will have a great sale and, when that happens, I'll be able to splurge a bit without any guilt.

So what broke my best no-buy streak ever? A skein of very old green thrift store acrylic. I've known since I first cast on that there probably wasn't enough yarn for that afghan I'm working on. It wouldn't surprise me if I had more green up in the sewing room somewhere, but getting sick sidetracked me from my sewing room clean up and it made more sense to spend ninety-nine cents at the thrift store than it made to spend three or four bucks at Walmart. As a bonus, this is the same brand as most of the yarn I've been using and it's the same sort of a green, probably a better match than brand new yarn would be.

Along with my yarn, I bought another stuffed cow. This one is wearing a fez. I'm not sure why we needed a stuffed cow that's dressed as a Shriner, but my son convinced me that it's necessary. ('Cause fezzes are cool and maybe the purple cow head that's still hanging in our living room needed a friend?) What I do know is that if I can make my kid that happy for ninety-nine cents, I'm probably going to do it.   If he changes his mind later it can always go back to the thrift shop...but I don't expect that to happen.

This post is linked to Patchwork Times.
Posted by Michelle at 7:12 PM

Love the cow. I used to give the GKs $1/each to spend at yard sales. Cheap entertainment, in my book.