We went back to Value Village on Wednesday to see if they still had that auction game from last week. And because there's a deal on Thursdays when all items with the right colored tags are $2 each. I still want to find some more warm sweaters and inexpensive jeans for active little boys are always a a good thing. Most of the games were gone, but I found a few sweaters and those fabric scraps I posted about on Sunday. And we browsed. 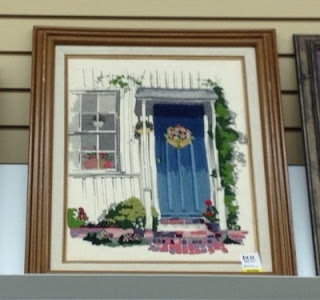 This is the only piece of crewel embroidery that I've ever fallen in love with. I left it on the shelf without even looking at the price because I've got another piece of stitchery with a blue door on it ---and I made that one myself, which gives it priority.

And then there was this, a life size plush purple cow trophy with what my sons tell me are glowing red eyes... 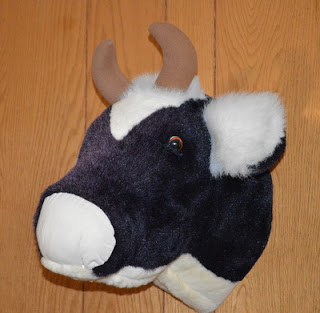 If it had been a deer, or an elephant or a rhino, or any other kind of traditional trophy animal, I wouldn't have hesitated. But it's a purple cow with red eyes and absolutely one of the most ridiculous things I've seen in years of thrift store shopping. And did I mention that it's life size?

I said no. My son asked if he could spend his birthday money. And after six or seven more half-hearted nos I finally saw reason because he really loves this awful thing.

And now the cow is hanging over my couch, at least until I put up a nail over the eleven-year-old's bed. There's a Webkinz stuffed possum perched between his horns, added after I took the picture. I'm glad that we live in the kind of house where our boys can hang a plush purple cow on the wall. It'll go into the bedroom because my son wants it there, not because it's an eyesore. (Which is worse, the cow or my tiki painting? I think it might be a toss-up. But the cow is not going in my sewing room!)

I'm ashamed to admit that it took me until Friday morning to realize why the cow is purple. Everyone but me got it. I'm claiming that I was thrown off by the glowing red eyes. While I was looking for the poem, I came across this purple cow story. We could have a whole weird elf on the shelf thing revolving around this cow...
Posted by Michelle at 4:00 AM