I've got a happy jumble of stuff on my knitting needles. There's the second sock of the pair I've been using for the Let's Knit a Pair of Socks pictures and the Fly sock. I want to cast on another pair, but the needles I have free are too dark for me to see the yarn against them. The pair I'm mad at is still in time out. but if I cast on the second sock and actually finish it this time, I'll have a light colored set of needles to use...or I could ransack my old project bags. I know I own more size 2 needles than I'm using right now. 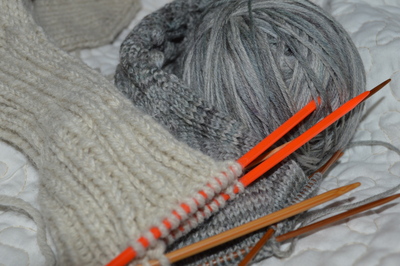 . This time Maddie and her family are in Mexico to film an episode of The Family Frugalicious, their new reality show. After Maddie balks at signing a time share agreement because she knows that her viewers aren't going to get the same wonderful deal that she's being offered and wants to do her own research into the company, the sales manager's body is found floating in one of the resort's pools. With the producers of her show urging her to investigate the death, Maddie starts to wonder how far the people around her would go to build ratings and if her almost-ex husband, who she's pretending to be in love with for the sake of the show, knows more about what's going on than she does.  I love that the author has created a completely different type of murder and motive for each of the three books. She's really captured the stress of time share sales in this one. (We own a hand-me-down time share and every time we use it, they try to sell us something new. I don't want to know how pushy they'd be if we weren't already owners.)

If I had to pick only a handful of things I could read about, haunted houses would be near the top of the list. I love reading about spooky old places with hidden secrets. If that's in the description I'm going to pick up the book and read it, which is how I wound up with Hargrove House

by Allie Harrison. Torrie Reynolds, who entered the abandoned Hargrove house on a dare and quickly fled in terror, is hired years later to refurbish the old place. It's just too perfect -- her handsome new employer, the way that everything on the project goes so easily, the way she can step into each of the bedrooms and immediately know what paint colors and furnishings she needs to order. Everything except for the digging sounds coming from the cellar... I didn't find this book at all spooky. It had more of a traditional gothic feel to it, with Torrie falling for her employer and avoiding the forbidden locked rooms.

This post is linked to Yarn Along and Patchwork Times. The publishers provided me with ARCs.
Posted by Michelle at 10:02 AM

Thank you for the book review/suggestions. The socks look great!