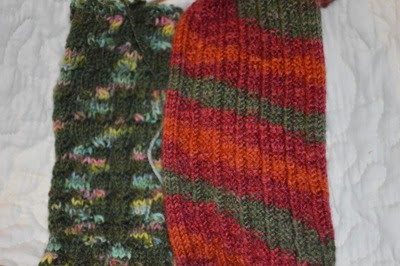 I started the Croc Socks in August 2013 and I have not been loving them. I do like the yarn and I like the look of the pattern, but I'm not enjoying the process. Especially since I put the second sock down halfway through the heel flap and can't quite remember the changes I made to the pattern  for the first sock. I'm really too far along to rip it out and start over with something else...

The Noviembre socks have been on the needles since 2008. According to an old post, they were going fine until I was doing dishes and had a mishap with a broken Pyrex bowl. There's no reason not to finish them now...except maybe for the part where the pattern is in Spanish and I hope I come up with the same translation again!

Maybe if I force myself to spend fifteen minutes at a time, I can actually get these done.

A garage sale mystery? Of course I was going to read Tagged for Death

by Sherry Harris. When Sarah Winston finds a blood soaked shirt in one of her bags of garage sale leftovers, a shirt that obviously belongs to her ex-husband, she isn't sure what to think. The shirt points to something awful, especially since the young woman he left her for is missing, but she can't believe that he's guilty of murder.

The background turned out to be more about civilian life on and around a military base than about garage sales, but the plot and characters were interesting enough that I'll be watching for the second book in the series to come out next summer.

The writing team of Sparkle Abbey is back with a sixth book in the Pampered Pets mystery series, The Girl with the Dachshund Tattoo

. This time it's Mel's turn to solve the mystery, and she's plunged right into one when she finds a body at the Laguna Beach Dachshund Dash. Betty, Mel's quirky (and that's putting it mildly) assistant, is back with a larger part in this book. The gun she's been carrying since their last brush with danger has gone missing, making her the main suspect in the murders. I loved the chance to read more about Betty.

Cookie Chanel, owner of a vintage clothing store, comes home from an estate sale with more than new inventory for the shop. The ghost of Charlotte Meadows is tagging along with her former belongings, and she expects Cookie to solve her murder. If You've Got It, Haunt It

by Rose Pressey is a cute read with useful tips for finding vintage clothes and less-than-useful tips for getting rid of ghosts scattered through the chapters.

Disclosure -- the publishers provided me with ARCs
Posted by Michelle at 4:00 AM

This is why I knit two at a time, I know I would have either one sock or some half socks. And, I love the books you listed. I sent the list to my husband in case he hasn't gotten my Christmas gifts yet. ;-)