I can see myself finishing these! 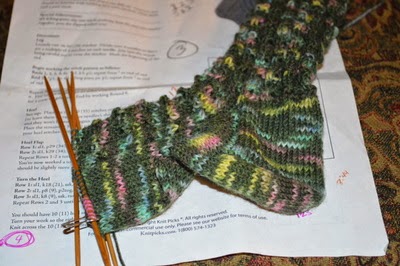 Fifteen minutes. You can work on almost anything for a few minutes, one stitch after another until the timer dings, even if you're convinced that you hate the needles and hate the yarn and the stitch pattern and can't remember how you tweaked the pattern so that the first sock would fit....

Fifteen more minutes and things start to look a little better. Stretch it into a half hour and the heel flap is done and the stitches are picked up for the gusset and you've stopped hating the sock enough that you can slog through the foot

A couple more pattern repeats and I can start toe decreases. I can manage that!

Georgia Thackery has a skeleton in her closet....or in her armoire, if he's not hanging out in the attic. Sid is a walking talking skeleton that's lived with her family since he saved her life when she was six years old. They've never given a lot of thought to what or who he was before he became her best friend.  When an anime convention provides the perfect way for him to leave the house, costumed as a skeletal character, Sid spots a woman who sparks recognition and fear.

I've got to admit that I was skeptical when I picked this one up at the library, but A Skeleton in the Family

is an absolute blast. Lots of times, I have trouble suspending my disbelief when it comes to cozy mystery plots, but author Leigh Perry presents Sid in such a matter of fact way that I had no trouble accepting him.

I have a 10-15 minute journey to and from work on the bus so I always take my knitting. The rows add up surprisingly quickly even only knitting a few minutes here and there. Gorgeous sock wool - the colours are fab!

I love the idea of setting a timer. I'm going to try that with my christmas socks I am trying to finish. Thanks!

I used to set a timer for my kids to get homework done but never needed that with knitting I set the yarn out for the next project to keep me going sometimes. Love the socks what is the stitch pattern? have a great weekend