{Yarn Along} The Squid is Growing 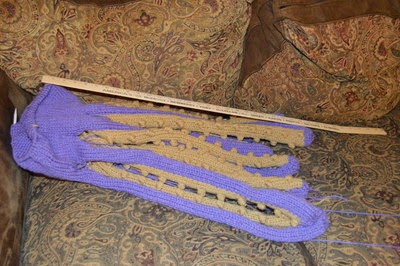 I'm used to lying things next to a quarter or rotary cutter to show how small the pieces are, but for the squid I had to drag out a yard stick. The legs are all joined and I'm about a quarter of the way through the head. This thing is heavy! But the end is in sight.

by Christina Freeburn is a fast paced mystery that starts with the death of a scrapbooker in the parking lot of a retreat and doesn't slow down a bit after that. Knowing that there's an identity thief lurking among the croppers, Faith isn't going to stop searching for the bad guys until she's sure that they won't be able to use her customers' memories and personal information against them. I've been enjoying this series and happily read through this book in one sitting, but I don't think I'd recommend jumping in with this one. There's not a lot of backstory to explain who's who and what the relationships are.  You'll have more fun if you start with the first or second book.

Revelation Dyer and her husband Jeremy both come from families with long histories of magic. His ancestors built their wealth and fame by creating elaborate stage illusions. Her side of the family is more complicated than that. After Rev fatally shoots her husband while they're performing the bullet catch trick on a Las Vegas stage, she fears that whoever altered her pistol will come for her and her daughters next and she flees to Hawley Five Corners. The home of her ancestors, the town was mysteriously abandoned in the 1920s and has been sitting all this time, waiting for her and her girls.

I loved The Hawley Book of the Dead

. It's full of atmosphere and magic and mysteries.

Disclosure -- the publishers provided me with review copies.
Posted by Michelle at 3:00 AM

Those tentacles are awesome! I cannot wait to see it done! Are you working to a pattern?

can't wait to see it finished and stuffed

How cool is that? It amazes me what people come up with. And I agree.. can't wait to see it finished.