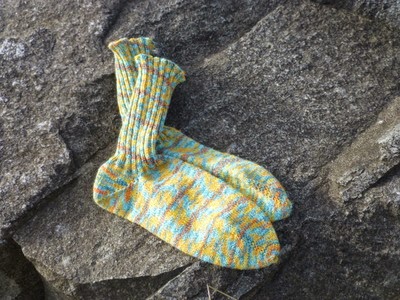 I'm calling these my Ocean View socks, because I knit most of the second sock while sitting on this couch looking at this view. Or at least knowing that it was out there, because most of my knitting happens at night. I don't know how to convince the camera that I want a picture of the sock and the pretty stuff behind it, and I wasn't quick enough to get a picture with pelicans flying by, but you get the idea... 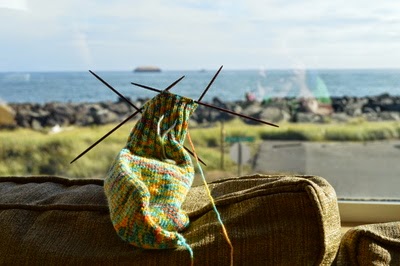 To make it even more appropriate, the yarn is Knitpicks Dancing in the Hula colorway. Ties in with the whole beach idea, even if I was knitting up in Washington State. I think this is the absolute last of the Dancing. Makes me kind of glad I bought it in every colorway...and it's very satisfying to know that I used it all.

Now I'm playing with TOFUtsies. It has shrimp in it.  I think that was my whole motivation for buying this skein way back when. Knitting with shrimp...how could I not want to try that?

Edgar Allan Poe, Jeckle and Hyde, a series of murders that conjure up images of Jack the Ripper, a forbidding basement laboratory,  a heroine who dares not remove her scarf... Of Monsters and Madness

by Jessica Verday is all kinds of mysterious and creepy fun.   After the death of her mother, Annabelle Lee journeys from Siam to Philadelphia to live with her father and grandfather. Accustomed to living with missionaries in a foreign land, she knows nothing of proper ladylike decorum. Her fascination with science and medicine infuriates her father.

My only complaint is that this is the first book in the series and ends with a horrible, wonderful cliff hanger. If I could pick up the second book right now, I'd be happy. But waiting until fall of next year is going to make me a bit cranky.

I've also been reading How We Learn: The Surprising Truth About When, Where, and Why It Happens

by Benedict Carey. It's very dry stuff about how the brain works, how memories forms and how we retrieve them later. The gist of it is that the brain is quirky and we still don't understand the best ways to study and learn. (If there even is a "best" answer that works for everyone.)

For more pretty knitting projects to drool over, check out On the Needles at Patchwork Times and Work in Progress Wednesdays at Tami's Amis. For more finishes, check out Sew Much Ado, Finish it Up Friday, Can I get a Whoop Whoop?,  and Freedom Fridays, Wonderful at Home, and Inspired Friday.