{Yarn Along} A Hatchling!

It's a sort of misshapen knit egg. Wanna guess what's inside? 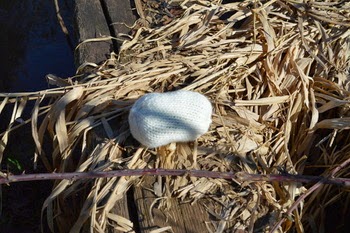 Because of course the spring knitting should include a baby alligator, especially when every project I've been slogging along on for the past three months is green. 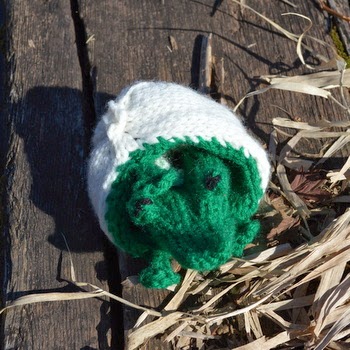 The pattern is Egg to Alligator from Topsy-Turvy Inside-Out Knit Toys by Susan B. Anderson, which I blogged about when it was first released last June.  The green yarn is Red Heart Super Saver which I bought when I was knitting the Christmas ornaments and white mystery acrylic from a fox hat Teenage Daughter knit.

He's a quick little knit -- I cast on Monday afternoon and added the legs and wove in the ends on Tuesday morning. I tinkered with the legs a bit so that he'd have actual feet, and did a three needle bind off instead of kitchner stitch for the end of his nose. 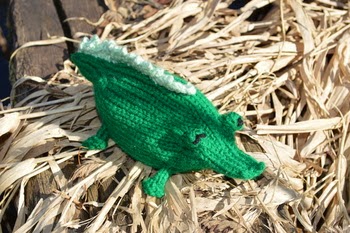 by Stephen King. It's one of those books that I haven't been able to shake from my memory.  Have I mentioned that I'm a sucker for haunted houses? Although in this case it's an island. And Edgar's problems with his memory, his descriptions of "sideways thinking" when a word he needs is just on the tip of his tongue but he can't say it -- those scare me more than any of the supernatural elements in the book because a couple of times a year my migraines do that to me. It's not something I want to think about too hard when I'm not in the middle of one.  This time, I was more focused on the supernatural events. Something about abandoned old houses really creeps me out, especially the one in this book!

For more pretty knitting projects to drool over, check out On the Needles at Patchwork Times and Work in Progress Wednesdays at Tami's Amis. I'm also linking to

Finish it Up Friday, Can I get a Whoop Whoop?, Get Crafting Friday, Pinworthy Projects, Freedom Fridays, Inspired Friday. and Friday Favs.

Edited to add -- I just saw that the designer has two free inside out patterns, Egg to Turtle and Duck to Bunny

Such a cute little knit alligator. So much better than the real kind.

How cute! Cheering for the Gators this weekend in the Final Four!