Last spring, I misplaced the charger for my little point and shoot camera. It was last seen here in the house and I figured it would turn up eventually, so I started taking all of my blog pictures with the DSLR and only using the little camera when we were out and about and I really needed a picture of something then and there. I was getting a little silly, rationing my pictures because if the battery wore out before I found the charger, I wouldn't have a little camera to carry around with me.

(Don't choose this opportunity to tell me about that other mom you know who has five kids and several large dogs and homeschools and volunteers and exercises every single day and keeps an immaculate house and never loses anything ever. That won't help me find my camera charger or be a better mother. It'll just make me annoyed with you.)

At some point, the camera itself managed to disappear. I know it's in a tote bag, I just haven't bothered to sort through the ones I'm not using to find it because it can't take pictures at this point anyway. And I couldn't bring myself to spend what it would cost to buy a new charger. I was hoping that Hubby would buy me a new camera for Christmas. (I'd probably have my new camera now, but even when you have insurance and you're not at fault, car accidents are absolute hell on the family budget. There were no Christmas presents for the adults at our house this year.) 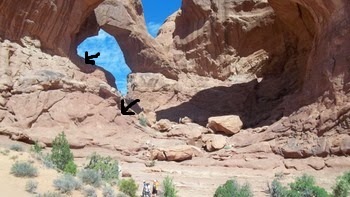 But I do have a camera in my purse again! Last week, Hubby asked what the camera case sitting on our headboard was (after I'd finally fessed up to losing my own charger and camera.)  It's Teenage Daughter's old camera, the one she's been letting her brother use since she got the nifty new one...the camera that fell out of an arch when it slipped out of Teenage Daughter's pocket...

See the arrows? That little camera tumbled from the top one down the rock face to the bottom one. It takes a loooong time for a camera to fall that far as both mommy and daughter watch in horror. I hadn't made the climb with the rest of the family, so I was the one to go in search of the mangled pieces.  The batteries fell out. Can you believe that was the only damage?

The camera still takes decent pictures. And it uses AA batteries, so there's no special charger for me to misplace. I knew that camera was in the house, so why did it take me so long to realize that it was the perfect solution to my own missing one?

Maybe I'll get a new camera next Christmas. They'll probably have new bells and whistles by then, right?
Posted by Michelle at 3:30 AM

You crack me up. Thank you for the paragraph about the woman/mom who has 5 kids, homeschools, exercises, etc. SO funny.

Never mind, now that you don't need your other little camera any more it will make an appearance along with it's charger!

I understand the budget thing, I used to take pictures with a film camera when the kids were little then we could not afford to get the pictures developed. You know it was either eat or have pictures, somehow eating always won out. Years later I would find the rolls and not know what was on them and if I should develop them or not. I love digital cameras, but you can also lose the little cable that attaches it to the computer for downloading, they are hard to replace too. And I only had three kids, I can't image the additional chaos a couple more could add to a schedule.

i still get cross with the (grand) kids when they muck around while i am trying to take their pictures. You are wasting film i cry. They have no idea what i am talking about. Chuck your camera away, sure way to find the missing cable... ask me how i know :-)

I am not sure if it is the same where you are but in Australia the price of cameras seem to drop around September/October. I managed to pick up an "old model" (read last years!) for under half price.
Apparently the new models are all released around the same time each year.
I hope you find your cable and camera and don't need to buy a new one! It is so frustrating trying to learn all the new things on a camera.