You're going to hear a lot about this sweater, because it's going to take absolutely forever to knit this much stockinette.  When I agreed to this, I thought it was going to be an easy stretch of mindless knitting. It's been a long time since I knit a sweater and I thought this project would be a reasonable way to reassure myself that I could still do it. 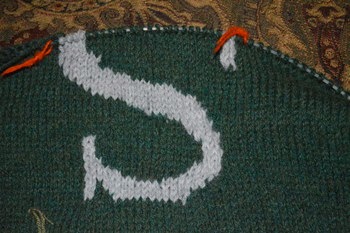 Problem #1 has been the letter for the front. The pattern tells you how easy it is to print out knitter's graph paper and then print the letter right onto it from your Word Processing software.  I can barely load paper into my printer on a good day, let along printing twice on the same sheet.  Someone has to have charted letters already, right? I searched the forums on Ravelry and found a post saying the charts for all of the letters were in the Charmed Knits

book. I got it from the library -- they're not in there. But  that version of the sweater is written for worsted weight, so I don't have to redo the math.

I printed the letter S, enlarged the letter S to the same height at the pattern from the book, got most of it knitted. And then I looked at the pattern on the blog. That letter is ten stitches taller. This one seemed a little small, but I am not ripping this out because I'm not recharting that letter and knitting it over again.

Heath's Weasley Sweater was an uneventful project. Uneventful enough that I have almost no memory of actually knitting the thing, except for taking this picture. I wish I'd reread my posts before  now because I would have done the hem the same way.

The reading has been less stressful than the knitting!

Snowblind by Christopher Golden is an entertaining ghost story. The residents of Coventry are on edge every time it snows. Now, a storm is coming, this one just as awful as the deadly blizzard twelve years earlier. I thought the book got off to a slow start, but once things really got going I didn't want to put it down.

by Linwood Barclay starts with an interesting premise. When Glen Garber's wife doesn't come home, he gets in the car and drives the route she would have taken. (I know the feeling -- except unlike him, I knew that I was headed for an accident and that my husband was at least okay enough to dial his phone.)  Glen's wife was apparently drunk and fell asleep behind the wheel after driving up  a highway on-ramp.  He's unable to believe that she would have done that,  facing a lawsuit from the surviving members of the family who hit her car, and quickly discovering that their friends and neighbors are all hiding dark secrets. The plot twists and turns and is definitely interesting, but I did get tired of the characters complaining about the bad economy and what it drove them to.

Disclosure -- Snowblind was provided by the publisher. The Accident came from the library.

Oh, wow! That "S" looks awesome, even if might be a teeny small.

Only you will know it's shorter. Most others won't have a clue. Love the color of the sweater!