a skein of yarn

I was going to title this post something about why I needed a skein of grey yarn, but the truth is that I didn't need it. It made sense to buy it. 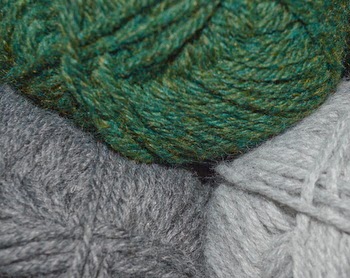 Back before Christmas, Teenage Daughter asked me to knit her a Weasley Sweater, in Slytherin colors, with an S. I don't have Slytherin green in worsted weight in the quantities that I need to knit her a sweater. The big box craft store only carries eight skeins of any one color at a time, so we wound up ordering online. The yarn came, life happened, and it was a while before I opened the box and took a good look at the colors.

The green is perfect, but that grey skein on the left doesn't contrast strongly enough. If I'm going to knit an intarsia S, which I'm going to have to chart myself, it's going to stand out! It was either buy a skein of lighter grey or wait to knit the sweater. I'd already bought ten skeins of green, so spending another three bucks so I'd be able to use it made more sense than doing without.

I suppose I could have made a solid color sweater, or something that wasn't a sweater, but I'm not going to.

This post is linked to Patchwork Times.
Posted by Michelle at 4:00 AM

Your logic is perfect!

It is going to be a great sweater!

I can't wait to see it finished.

That green is really nice. Should make a lovely sweater. Lucky daughter.