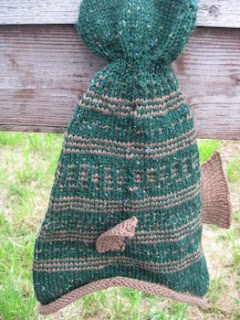 This is one of the projects that developed from what was in reach of the recliner. I'd bought a skein of Red Heart Super Saver Tweed (fifty cents at the thrift store), intending to make Quinn a green hat. Because with that boy, all things must be green.

I had a pattern in mind, but it's no longer available online and I can't go rummage to find my printout, so I went looking for another pattern. I found a couple of options, but nothing that felt like I could do it now. Then the dead fish hat turned up in my Ravelry searches.

Lots and lots of stockinette. Some make-it-up-as-you-go-along colorwork using another skein of Super Saver that shouldn't have been in with the baby hat yarn, but thank goodness it was! Quinn wanted it to have teeth like the shark hat, but I'm not feeling that ambitious quite yet. This was the perfect almost-mindless knitting project to get me through the beginning of last week.

The pattern has its own website. I printed it from Knitty and found out the hard way that the tail as written in the published pattern doesn't match the tail in the pattern photos. Why do they do things like that to poor, unsuspecting knitters? (The version from the pictures is at deadfishhat.com, so I guess I can do it that way if I knit Leif the blue one he wants.)
Posted by Michelle at 6:23 PM

That's awesome - loved the way it turned out! :)